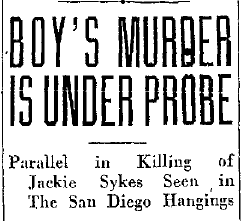 So far it is possible that a serial killer let two other men suffer the sentences he deserved. S.C. Stone (Book 1) and Albert Dyer (Book 2) were both convicted of murdering little girls. Stone was convicted of murdering May and Nina Martin and after his death sentence was commuted he was eventually released from prison in 1941 due to a “lack of evidence beyond a reasonable doubt.” Albert Dyer was convicted for murdering Melba and Madeline Everett and their friend Jeanette Stephens. He was executed.

There is evidence that connects these two Los Angeles crimes near the Baldwin Hills with the murder of Virginia Brooks (Book 3) and Louise Teuber near San Diego, both still cold cases. Investigators in central California also thought the death of 11-year-old Jackie Sykes, who was found nude and hanging from a tree in 1932, was related.

Book 4 of The Colder Case Series, one of the most difficult to stomach, if that seems possible, takes us East, where another little girl was murdered in the same manner as Virginia Brooks. 1937 was a very deadly year for children. It seems our serial killer got around.