I am both honored and humbled to be in the company of Brandon Garrett’s Convicting the Innocent.

Sometimes something pleasant and uplifting is required.

At the Investigative Reporters and Editors blog, there is a discussion of wrongful convictions and the corollary of “wrongful liberty” — the inevitable consequence of convicting the wrong person and leaving the guilty free to maim and kill. The focus on how the media can be partly responsible for wrongful convictions gives it a unique slant.

America is haunted by 100,000 missing persons and 40,000 unidentified sets of remains. Only one lab can truly connect the lost and the dead—and it’s revealing the secrets of serial killers in the process

Source: Anatomy of a Serial Killer

Melba Marie Everett, age 9, and her sister, Madeline Everett, 7, left with their friend Jeanette Stephens, age 8, for Centinela Park in Inglewood, California, at about 9:30 A.M. Saturday morning, June 26, 1937. Madeline took a picture book and a teddy bear. They had a blanket and a ball and they each packed a lunch in addition to having had breakfast at about 9:00 a.m.

Centinela Park was built during the 30s depression and funded in part with the Works Project Administration (WPA), which through local contractors paid wages with federal government money. The local and state government paid a percentage and supplied transportation and equipment. Millions of men put to work this way built roads and schools and parks all over the country. The Everetts lived at 571 East Hazel, and the Stephens at 531 East Hazel Street, marked with red, where the row of apartments built in the 50s and 60s are now. Here is a Google Earth of the park as it is today. 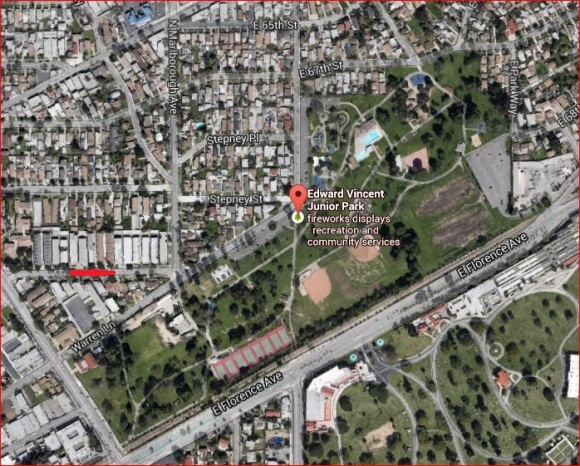 “CENTINELA PARK (plunge, wading pools; bowling, tennis, and horseshoe courts, baseball field, picnic ground with equipment), Redondo Blvd. and Prairie Ave., is a sixty-acre beauty spot about Centinela Springs in the ravines and gulches along the banks of Centinela Wash. Part of the area is landscaped; the rest is maintained in a natural state. Fossil remains of Pleistocene animals uncovered in the gravel wash have brought the conclusion that the springs were a prehistoric watering place. In the park are a large outdoor amphitheatre and the VETERANS’ MEMORIAL BUILDING, built with WPA aid as a meeting place and recreational center for veterans.” 1

No one noticed anything that could be called an emergency alerting the various park personnel of any danger. There was a man doing rope tricks and lassoing children as they ran by. There were adults and older children in the pool and younger children in the wading pool. There were baseball players thinking it was a typical warm Saturday. There were picnics as always during summer vacation. Nothing unusual, except for what 10-year-old Lillian Popp and her 12-year-old cousin Amy would report after the girls went missing.

Along about two o’clock Jeanette Stephens’ mother sent her son to fetch Jeanette. He didn’t find her but Mother wasn’t worried because the kids would “go to the plunge and play and at five o’clock” Jeannette had a favorite radio program. She knew she would come home when she got hungry. 2

The Search for Missing Children: June 26-28

A daughter late for dinner is not news. That is an occurrence that happens perhaps a million times every day in the United States. But when the three missing little girls young enough to be scared of the dark did not come home as nightfall approached, their families notified the police between 8:00 and 10:00 pm. As Inglewood Police Chief Oscar E. Campbell explained:

We have four or five of these reports each week, but, nevertheless, Capt. Muir ordered a radio patrol car to start the search for the children. When no trace was found of the children at 11 p.m., Saturday, Capt. Muir dispatched a uniformed officer to the Everett home. It was then that the officer advised Mr. Everett to go to headquarters and make out a missing persons report. This was done sometime between 11 and 12 p.m., Saturday.

So the search was already active by Saturday night. By Monday morning, June 28, the missing girls “feared kidnaped” was national news. The authorities and the community made a noble effort to find them. Hundreds of legionaries, Boy Scouts, police, anyone who would pick up a torch or a flashlight, they searched night and day in garages, abandoned houses and the Baldwin Hills north of Inglewood. The police questioned everyone who resembled the suspect and many who didn’t. They broadcast a description of the girls hoping to find them safe and sound.

Their pictures were also prominent on the front page of the Los Angeles Times morning edition of June 28 with the headline: “Three Children Feared Kidnaped; Hundreds of Police Join Hunt” with the known facts: